WATCH: Madonna Falls Off Stage At The BRITs - And Carries On Like A True Professional! 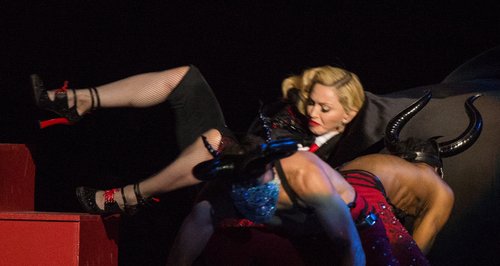 Watch the MOST shocking moment of the BRIT Awards - if not of 2015 so far - and Ed Sheeran's reaction to Madonna falling off stage.

When Madonna took to the BRIT Awards stage after 20 years, we were expecting one heck of a show - but nothing like what we actually saw happen. Poor Madonna suffered one of the scariest stage falls as a wardrobe malfunction ended up with her being dragged off stage.

Madge entered for her performance of 'Living For Love' in a full-length cape which was meant to be ripped off in one smooth movement by her dancers - but the neck tie failed to open and an overzealous dancer ended up dragging her backwards down three steps by her neck. Yikes! 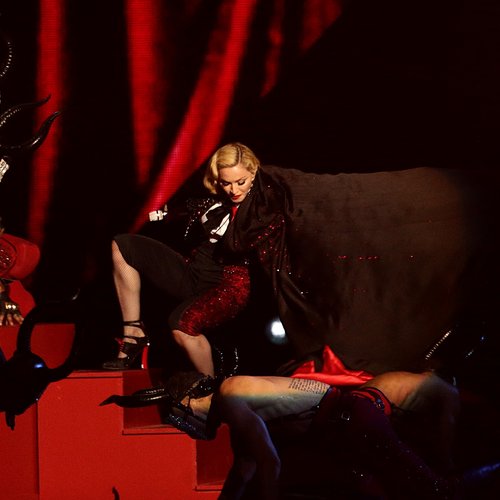 A fall like that would signal the end of most people's performances, but being the true professional, Madonna was on her feet in seconds and carried on with her energetic dance routine. It's no surprise she was a bit shaken up by the mishap, but she put on an excellent performance nonetheless.

Armani hooked me up! My beautiful cape was tied too tight! But nothing can stop me and love really lifted me up! Thanks for your good wishes! I'm fine! #livingforlove

The internet reacted in utter shock as thousands of viewers couldn't quite believe what they were seeing:

Honestly feel bad for @Madonna not a nice thing to happen falling on stage! The ultimate pro just kept going! That takes class!

I can't get over madonna getting dragged off the stage

Poor Madonna that must of hurt! Been a fan since she started (shows age!) but wow she rocked the #BRITs at 56yrs old #madonnarocks

That was NOT a "little spill" at the #BRITAwards! I can't believe @Madonna still finished her performance! That definitely HURT!

Ahead of her performance, 'Living For Love' had shot up the iTunes chart to number one - so there were a lot of people rooting for Madonna to be alright after her nasty accident.

It's not how we expected it to end, but there's no denying the #BRITs2015 was one unforgettable night!

That's gotta hurt! Check out 9 stage falls the stars would rather forget

Double winner on the night, Ed Sheeran, missed the actual fall in person but he's not too worried for the Queen of Pop's ego - even Beyonce falls over on stage after all!