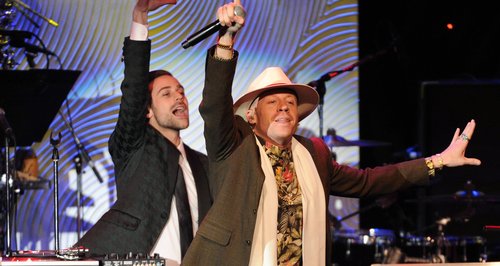 Queen Latifah will be acting as the officiant during the ceremony as Madonna also joins the pair on stage.

It has been revealed that Macklemore & Ryan Lewis' performance of 'Same Love' at tonight's Grammys will feature 34 couples getting married on-air.

The live rendition of the track, which will also feature Madonna, is set to see couples from a variety of backgrounds and sexual orientations tying the knot.

The New York Times broke the news and spoke to Lewis – whose sister will be taking part in the ceremony.

He said the weddings "will be in our minds the ultimate statement of equality, that all the couples are entitled to the same exact thing."

The track has become an anthem for marriage-equality and producer of the Grammys Ken Ehrlich said it was something the show is very "serious" about doing right and that it wasn't simply a publicity stunt.

There will also be an element of showbiz as actress Queen Latifah will officiate at the nuptials.

President of the National Academy of Recording Arts and Sciences, Neil Portnow addressed any controversy that may be caused and added: "I expect that people with all kinds of opinions might voice them, and that's healthy."

Meanwhile, Macklemore & Ryan Lewis' song is nominated for Song Of The Year – one of seven prizes they are up for at the Grammys.

Keep it Capital tonight (26th January) and tomorrow for all the action from this year's Grammys which takes place live from the Staples Center in Los Angeles.

Other performers include Taylor Swift, Lorde and Katy Perry.