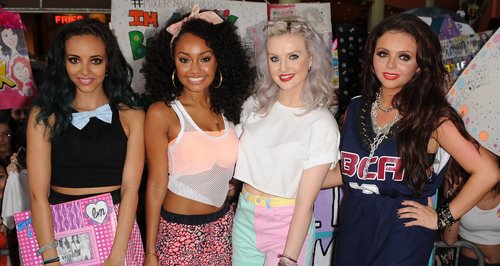 The 'How Ya Doin?' stars have cracked the top five after the first week of their album's release stateside.

Little Mix has scored a top five album this week in America following the release of their debut album 'DNA' there.

The 'Wings' four-piece launched their debut over in the US on 28th May and have landed themselves at number four on the US Billboard 200 chart, according to Hits Daily Double.

Jesy, Perrie, Leigh-Anne and Jade had found themselves at number two just behind Daft Punk's 'Random Access Memories' last week straight after the release, but finished up only two places lower at number four with their first collection of hits.

The record, which includes singles like 'Change Your Life', 'How Ya Doing?' and the titular track 'DNA', sold over 50,000 copies in its first week alone.

Check out a picture of Little Mix out in New York City last week below:

Little Mix have been out in America promoting the album for the past few weeks, and have picked up a number of celebrity fans along the way.

In addition to receiving a message of congratulations from Simon Cowell about their album success, Little Mix have also found themselves winning over fans like Demi Lovato and AJ McLean from Backstreet Boys.