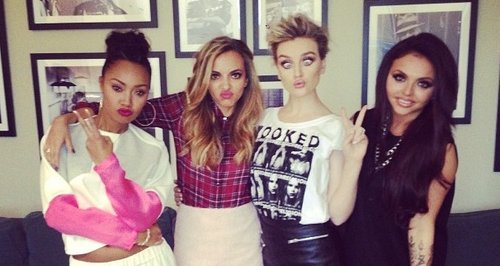 The singer caused a few stirs online when a shot of the group appearing on a US tv show appeared to show her sporting a new look.

Little Mix star Perrie Edwards has taken to the group's Instagram account to prove that she's not chopped off all her hair.

The star had many questioning if she'd said goodbye to her long locks when images of the girls on a US TV show appeared online.

Perrie posted the short video which showed how her hair was simply tied up in such a way to give the illusion of a short spiked cut.

Little Mix are currently enjoying a huge amount of success across the pond with their new album 'Salute' dominating in the US iTunes chart.

Meanwhile, UK fans need not fear as the girls will be back in the UK for their biggest ever UK tour this year.

The girls will perform across the country in May at shows including a gig at London's O2 Arena.