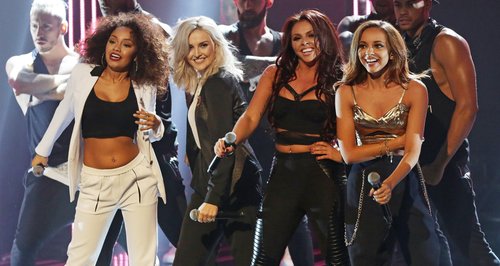 The girls are also expecting Macklemore to do well at the ceremony in Amsterdam tomorrow night.

Little Mix are predicting big wins for Macklemore and One Direction at the MTV Europe Music Awards 2013.

The ceremony takes place live from the Ziggo Dome in Amsterdam tomorrow night (10th November) and the girls spoke to Capital about how they see the night playing out.

After wishing Macklemore well, they went on to reveal how much they love the US rapper.

"He is a very inspiring artist as well with his music. Songs like 'Same Love' and stuff – he's a very brave writer and I think he's amazing," explained Jade.

Listen to Little Mix speaking to Capital's showbiz reporter Kevin Hughes about the MTV EMAs 2013 below:

Little Mix Talk About One Direction At The MTV EMAs 2013

One Direction will be going up against the likes of Justin Bieber and Cody Simpson for the Best Worldwide Act prize on the night.

Asked if they thought the boys could win, they said: "They can do it, of course they can. They're just incredible boys [and] they deserve every bit of success they get."

"I hope they do really well, yeh," added Perrie.

Capital will be at the MTV EMAs 2013 with all the action from the show and red carpet.

Meanwhile, Little Mix are among the stars who will be taking to the stage at London's O2 Arena next month for Capital FM's Jingle Bell Ball 2013.

Katy Perry, Lady Gaga, Jessie J and more will all be taking to the stage for this year's event.