Little Mix's Jade Thirlwall has been an amazing advocate and ally to the LGBTQ community, and fans have even credited her support for giving them the confidence to come out to their loved ones, so here is every time Jade has been an absolutely iconic LGBTQ ally...

Little Mix have always been heralded as advocates and friends of the LGBTQ community, but no one more than Jade Thirlwall, who has been a campaigner, supporter and confidant to members of the community, with one fan on Twitter even sending an incredibly heartfelt message to her thanking her for giving him the courage to come out.

So, to honour our queen Jade, we've put together every time she was a true LGBTQ ally, so you can love her even more than you already do...

Supporting And Campaigning For LGBTQ Charities

Jade has shown her understanding for the importance of using her platform to campaign and spread awareness for LGBTQ charities such as Stonewall, taking time out of recording LM5 a few years back to attend the Stonewall Youth Awards where she presented an award and helped raise awareness and understanding.

Had the best time yesterday celebrating the @stonewalluk #StonewallYouthAwards hosted by #LBGDiversity I was so inspired by all the young campaigners and very grateful to get the chance to discuss why I wanted to join the Stonewall family, what it means to be an ALLY and to present the lovely Anna with the Young Campaigner of the Year Award We could all learn a lot from these incredible young people. #ComeOutForLGBT #AcceptanceWithoutException

People flocked to praise the singer for 'dropping everything' and Jade told Stonewall: "I want to encourage more artists to raise the flag as allies to the LGBTQ community and help people accept themselves".

Gave A Fan The Confidence To Come Out...

One Little Mix fan reached out to the band to tell them that the group, and especially Jade's support, gave him the confidence to come out to those around him, in the most heartwarming exchange of messages we think we've ever read!

So last night I decided to finally come out as gay. It was honestly the scariest but most amazing thing ever. The support has been incredible. #JadeThirlwall from @LittleMix is a huge inspiration to me and I am so thankful for the platform she gives to the #LGBT community. pic.twitter.com/Fd29Ofz7vp

You should be so, so proud of yourself. And I feel so humbled and honoured to have a played a part in your personal journey. Congratulations on this new chapter of your life, where you can be completely yourself with the love and support of those around you ♥️ jade x https://t.co/EexqF4mZlK

And they aren't the only one!

Little Mix's Music Video With Cheat Codes, 'Only You' 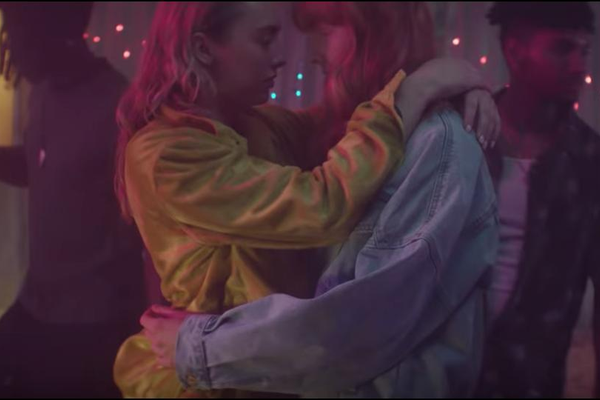 Little Mix dropped a single with Cheat Codes in 2018 called 'Only You' and people were completely shook, for all the right reasons, when the video dropped. The video features a lesbian love story between a girl and a mermaid, and they've been hailed as 'pride queen's' for giving exposure to an LGBTQ love story, something that is rarely shown in the mainstream media.

only you mv’s storyline is so beautiful & meaningful and it is one of the best storyline that i have ever seen, little mix and cheat codes truly did THAT #OnlyYouMusicVideo pic.twitter.com/fBbEpjz9H7

@PeytonList @LittleMix I'm sobbing, thank you for making something like this what I can relate to, it means so much. thank you. I'm in the lgbt community myself and this is the best thing that's ever happened to me besides that. you girls are true angels. #pride

thank you for everything you've done for me. Jade you made me realize it's okay to be queer, and I wanna thank you for turning a light in me you're the light of my life https://t.co/OU6wcH9M02

As well as supporting the LGBTQ community, she's also totally invested in drag culture.
So it was no surprise when she was picked as a guest judge on RuPaul's Drag Race UK season one.
Jade even spent a birthday at a Drag bar in LA – and even went to Drag Con to meet ALL the stars of RuPaul's Drag Race, including the very star of the show, look how happy she is here!

@foxxyroxywood and I repping both ends of the the titty spectrum. ——————————————————————————— Thank you for letting us share your birthday with you and for showing the world that being true to who you are makes you shine like the brightest

here I am pretending to act cool whilst hyperventilating inside. Along with Diana Ross, @rupaulofficial has inspired me as an artist and performer, whilst giving me the confidence in myself I never knew I had. #ifyoucantloveyourself #howinthehellareyougonnalovesomebodyelse #AMEN

Proudly Flying The Rainbow Flag For Everyone To See

Jade's commitment to pride and immersing herself into the LGBTQ+ community can be seen throughout everything she does, whether it's flying the pride flag through her outfits or on her social media, she even threw a drag themed birthday party, literally wearing one massive rainbow and raised money for 'Stonewall', a LGBTQ+ charity in the process, we mean, how much more of a god damn icon can you be?!

Nothing but respect for our LGBTQ ally and queen <3.

Download Our Brand New App For All The Latest Little Mix