Lawson's Capital TV Mixtape To Air All Next Week 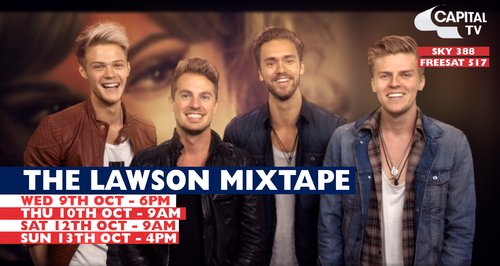 Lawson takeover Capital TV next week with their brand new mixtape show, as voted for by Capitalfm.com readers on Twitter and Facebook.

The 'Brokenhearted' four-piece have put together a two-hour mixtape of their favourite music videos of the moment, and Lawson fans will get to watch the boys in action all week across Capital TV.

Andy Brown, Ryan Fletcher, Adam Pitts and Joel Peat will be bringing you their picks for the best songs beginning with the first airing if The Lawson Mixtape on Wednesday 9th October at 6pm.

Check out Capital TV right now across Sky 388 / Freesat 517, and you can also get Capital on your iPhone/iPad app available here

Check out the full airing times for The Lawson Mixtape on Capital TV next week below:

Lawson's brand new single 'Juliet' is available to download from 13th October. You can pre-order it here.