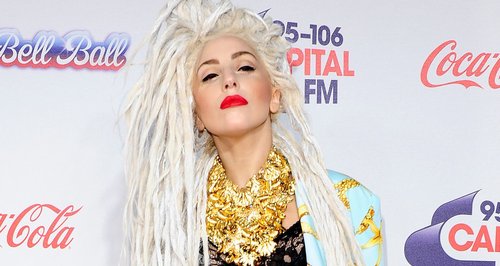 The 'Applause' star took time out to sign autographs and chat to the family after her O2 Arena set.

Lady Gaga reportedly got to spend time with Victoria and David Beckham, and their family, backstage at the Capital FM Jingle Bell Ball 2013.

Fashion designer Victoria and former England footballer David are said to have took two year-old daughter Harper backstage at the O2 Arena event on Sunday (8th December) after watching her close out the show, telling Gaga that Harper is her "biggest fan".

"Victoria and David, along with Harper, were taken to meet Lady Gaga backstage, and proudly told her that their daughter is her biggest fan," a source revealed to MailOnline this week. "They also said that even though she's only two years-old, she already sings Gaga songs."

"Met @LadyGaga last night, so sweet to the boys and Harper. What a show, she is AMAZING!! x vb" Victoria tweeted on Monday (9th December).

> WATCH: Lady Gaga sing's 'Do What U Want' at the Jingle Bell Ball

It is also believed that the Beckhams' son Brooklyn watched 'Juliet' four-piece Lawson's set from the side of stage at this year's Capital FM event.

Lady Gaga closed out the Capital FM Jingle Bell Ball 2013 on Sunday with a set featuring hits like 'Applause', 'Do What U Want' and 'Aura'.