Lady Gaga To Be First Artist To Sing In Space In 2015? 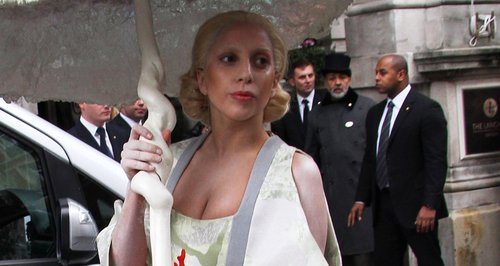 The 'Do What U Want' singer says she will confirm or deny the rumours next week at her album launch.

Lady Gaga is reportedly set to be the first singer to perform in space and has teased fans about a potential announcement for next week.

The 'Applause' star faced rumours this week that she will perform a song onboard the Virgin Galactic Shuttle in 2015, as part of the Zero G Colony high-tech festival in New Mexico.

Despite initially being simply tabloid speculation, Lady Gaga herself retweeted a link to one news story before teasing that she will either confirm or deny the rumours on the launch day of her new album 'ARTPOP' next week (11th November).

Lady Gaga is believed to be the first artist to sing in space as part of the special festival flight in early 2015, six months after the first commercial Virgin Galactic Flight.

Earlier today Lady Gaga was announced as one of the second night performers at this year's Capital FM Jingle Bell Ball 2013, which takes place on Sunday 8th December.