The 'Marry The Night' singer wears nautical accessories with a pink bra exposed for her late night visit.

Lady Gaga was pictured placing her order in a fish n chip shop in London last night as she headed for a traditional UK takeaway.

The 'Applause' singer visited the Sea Shell in Marylebone wearing a nautical themed outfit with latex trousers and a pink bra.

Earlier in the week, she had told fans on Twitter how much she was looking forward to the treat upon her arrival in the UK.

Check out a picture of Lady Gaga in the fish n chip shop in London below: (Picture: Splash) 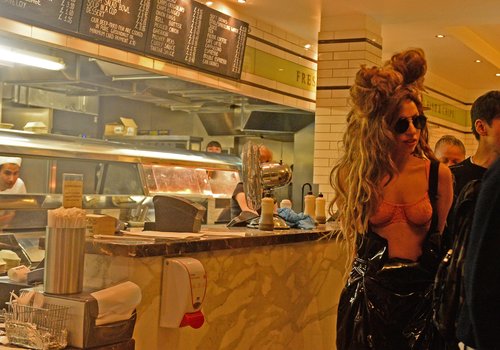 The 'Bad Romance' star is preparing to open this year's iTunes Festival 2013 on 1st September and also logging onto her social networking account to tease details of her performance.

She's also been instructing fans on what they should wear to the gig, billed by her as 'SwineFest'.

When Is Jesy Nelson’s New Music Coming Out?