Lady Gaga To Join Beyonce On Stage For 'The Mrs. Carter Show' Tour Gig In Brooklyn?

The 'Bad Romance' singer could make one of her first appearances since undergoing hip surgery this summer.

Lady Gaga will reportedly join Beyonce on stage in August for her 'The Mrs. Carter Show' world tour in Brooklyn.

Reports quoting concert listing website Songkick.com claim they have received an email stating the inclusion of the 'Telephone' singer to her gig on 3rd August.

The Destiny's Child star performs at the Barclays Center for three nights this summer and an appearance from Gaga would be just her second on stage since undergoing hip surgery at the start of the year.

The 'You & I' star made her first performance in three months when she joined jazz musician Brian Newman in New York earlier this month. 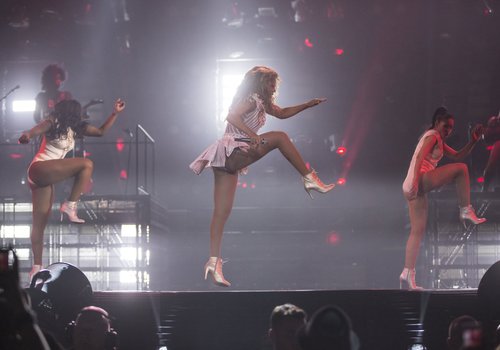 Meanwhile, Beyonce's personal life has dominated headlines in recent weeks with claims that star is pregnant with her second child.

Both she and husband Jay-Z have since denied the reports.