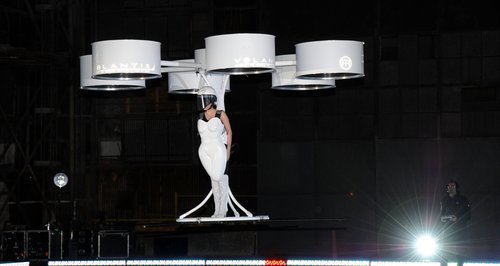 Watch the 'Venus' singer being levitated in the air to celebrate launching her brand new record.

Lady Gaga launched her brand new album 'ARTPOP' at the weekend with a stunt that saw her levitated in the "world's first flying dress".

The 'Do What U Want' singer staged an incredible stunt inside a building in the Brooklyn Navy Yard on Sunday (10th November) where she was strapped into a battery-powered "dress" called the Volantis, before being levitated into the air.

The high-tech piece of equipment was designed by TechHaus, part of the US star's Haus Of Gaga company, who have been working on the project for two years.

Watch Lady Gaga being levitated into the air in her Volantis flying dress below:

"I will be a vehicle today for their voices, youth all over the world," Lady Gaga announced just before the levitating stunt.

Check out a picture of Lady Gaga preparing for take-off below (Credit: Getty):

The 'Applause' singer also announced her intention to stage the first musical performance from outer space, before inviting those in attendance to a launch party for her new album called the ARTRAVE.

View a snap of Lady Gaga at her album launch party below (Credit: Getty):

Lady Gaga changed into a steampunk-inspired outfit for the official launch event, which came ahead of the global release of her 'ARTPOP' album and app today (11th November).