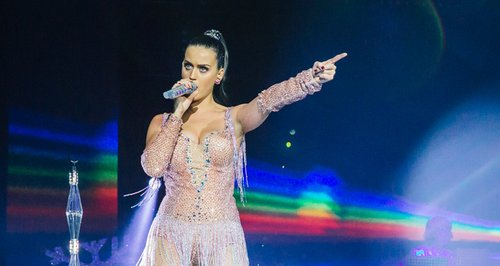 The 'Firework' star chats to Capital about modelling he attire on the 90s girl-power stars.

Katy Perry has told Capital that her promotional campaign and current outfit choices are based on taking inspiration from the Spice Girls.

Katy Perry Talks About The Spice Girls Influencing Her Fashion

The 'I Kissed A Girl' singer told showbiz reporter Kevin Hughes that her 'Prism' look is an ode to her love of late 90s and early 00s fashion.

"I'm basically taking a lot of my fashion cues from the Spice Girls," she confessed. "I love that fashion, like late 90s early 00s."

Katy always looks her best on stage and loves to showcase as much flamboyance in her attire as possible.

The US star recently announced details of her 'Prismatic' world tour and also wowed on stage at London's O2 last weekend for the Jingle Bell Ball 2013.

Katy performed some of her biggest hits including Vodafone Big Top 40 single 'Roar' and classics such as 'California Gurls', 'Teenage Dream' and 'Firework'.