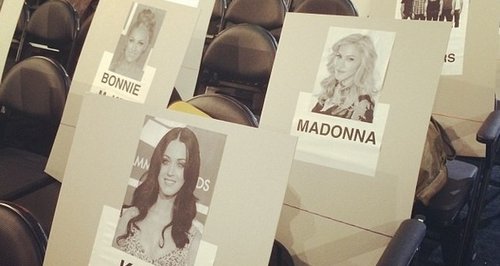 Check out the rumoured seating plan for where the stars will be sat this Sunday at the ceremony.

Katy Perry and Madonna are rumoured to be sat next to each other this Sunday (26th January) at the Grammy Awards 2014, after pictures of an alleged seating plan emerged online today (24th January).

Among the rumoured seating pairs are Beyonce and Jay-Z together, sat just in front of 'Get Lucky' duo Daft Punk and Canadian sat Drake, as well as Pink and Nate Ruess from Fun. being placed just behind The Beatles' Paul McCartney and Ringo Starr.

Check out some of the rumoured seating arrangements for the Grammy Awards 2014 below (Credit: Instagram):

One pairing likely to make some great pictures on the night is Katy Perry being sat just in front of 'Music' star Madonna for the iconic awards show, while Taylor Swift is just a few rows ahead of John Lennon's widow Yoko Ono.