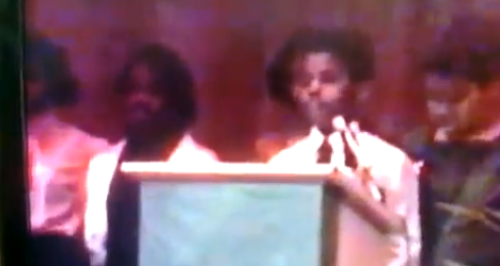 Kim Kardashian shared a super adorable video of Kanye as a child, reciting a poem dedicated to Martin Luther King.

We LOVE a good celebrity throwback, and this video of Kanye West at 12-years-old is just the cutest!

Kim Kardashian posted a video of Kanye reciting a poem dedicated to Martin Luther King on Twitter. She captioned the cute clip, “I wish I posted this yesterday! How cute is my baby!!!!!!! ‪#MLK”.

The video is labeled as having been filmed in 1990 which would make Kanye 12 years old in the clip where he reads the poem he wrote called ‘His Name Means Love’.

“So Blacks, Hispanics, Jews and Asians could put their foot in the door, Yes, we know that this man is great, That's why today we celebrate, Everyone lifts their voice and sing, For a man who wanted freedom to ring, Martin Luther King is who I'm speaking of, A man whose name means love."