Kanye West At The BRITs: The 8 WTF Moments From Fans During His Performance 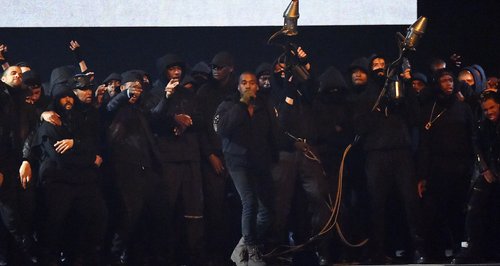 Well, what did we expect to happen when Kanye West took to the #BRITAwards stage? There was so much audio muting and flamethrower fails, we're not even sure he was performing an actual songs. Here's the most WTF moments through it all...

It's safe to say that Kanye West likes to make an impression when he performs on stage, and the 2015 BRIT Awards were NO different.

Between the hilarious amount of muting and Taylor Swift's terrifying reaction to Ye's #squad, there was A LOT going on in this performance - here were our fave mental things.

1. The audio being muted for 80% of the performance

That 'Audio Muted' sign came up on the TV so much that we were pretty sure that was the name of the song for a while. ALAS, it was just because he was doing loads of swears. Naughty Kanye.

We've never seen a face expressing 'WTF' quite as well as Miss Taylor...

3. But then she got straight back to dancing with Kim Kardashian

NOTHING stops Tay Tay from shaking it off at an awards ceremony. NOTHING.

4. Lionel Richie wasn't sure WHAT was going on

Poor Lionel, he only came for a free meal and a bit of bubbly.

5. Then Kanye got bored of rapping, so got his mate to do it instead

WHO IS THIS PERSON? ANYONE? ANYONE?

6. There were some VERY fancy (and dangerous-looking) fiame-throwers... That both went out 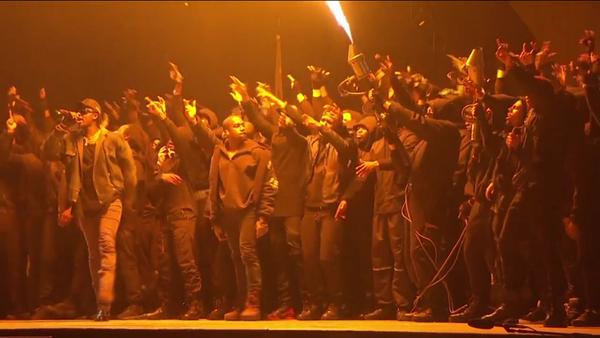 Leaving Kanye and his group rapping in darkness. LOL.

Kanye was muted by ITV for half his song and then some dancer pulls madonna off the stage on the Brits main act..... pic.twitter.com/rkyM48IE7t

8. But at the end of the day, Kanye West is the real winner - because we're all talking about Kanye West.