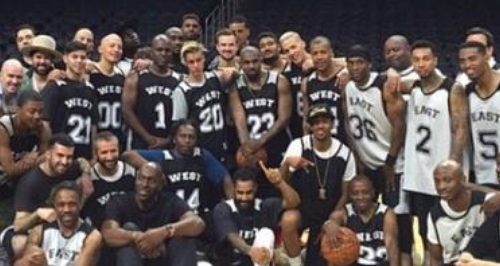 Well, of course Kanye’s bday would consist of a private game with his favourite LA Lakers players… and Justin Bieber.

We’d love to live a day in the life of Kanye West. The rapper has just had the craziest birthday party OF ALL TIME – Kim Kardashian hired out the ACTUAL STAPLES CENTER for him to play basketball with a bunch of NBA players. Casual.

Are Kim and Kanye hiring out ACTUAL DISNEYLAND for North West's second birthday?!

Kanye turned 38 last night, and Kim lead him blindfolded to the Staples Center in LA where she had hired out the entire 20,000 capacity venue – home of the LA Lakers – for his birthday shindig.

Kanye was joined by a host of his favourite NBA players for a game, as well as Justin Bieber and John Legend who sang to the birthday boy. She'd even sorted shirts for the players so Kanye was leading up team 'West' (obvs) and the other team was 'East'. Cute!

Kim rented out staples bitch!!! Him and his boys are going to ball!!!! Happy birthday Yeezy!!!!

Kim also posted a snap of Yeezy on his way to his surprise party with a blindfold on:

Thank you Staples Center for the most amazing birthday party for Kanye!

As well as putting on his ridiculous party, the Kardashians took to Twitter to wish Kanye a happy birthday:

Happy Birthday 2my best friend in the entire world! U R the most amazing husband &dad! U inspire me every single day pic.twitter.com/XbsHW1RpFv

Well, Kimye don’t do small birthday celebrations – but what on EARTH can they pull out of the bag for Kanye’s 40th now?!

Is the world ready for #Kimye the movie?! The couple are rumoured to have a biopic coming up…