The 'SexyBack' star enjoyed a day off with the Hollywood actress as they relaxed in the sunshine.

Justin Timberlake has been pictured heading for a round of golf with his wife Jessica Biel in Tennessee this week.

The 'Cry Me A River' singer wore a striped polo shirt with a black cap as he headed through the car park at the Mirimichi Golf Course in Millington with the Hollywood actress.

Jessica opted for an all white outfit, and Justin was the doting husband carrying the clubs from their car to the clubhouse.

The former N*Sync star is a keen golfer and acted as one of the ambassadors of the US Ryder Cup squad in 2012.

He is also a creative director with golf brand Callaway and holds his own celebrity tournaments each year.

Check out a picture of Justin and Jessica heading for their round of golf below: (Picture: Flynet) 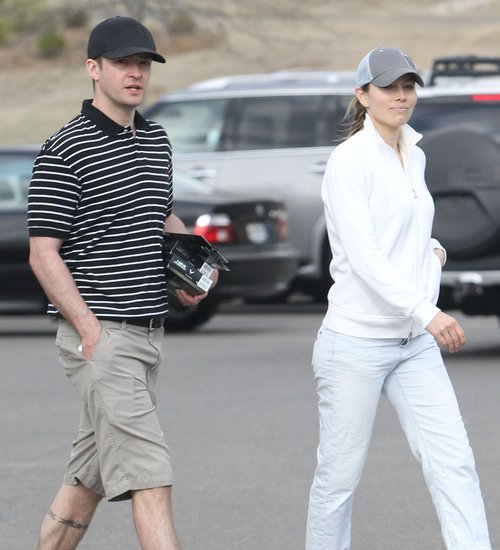 Meanwhile, the golfing world's first major of the year finished this past weekend, as Australian Adam Scott claimed the famous green jacket at the Augusta National.

His victory was praised by the likes of One Direction singer Niall Horan who told fans on Twitter that he was glued to the action all night.