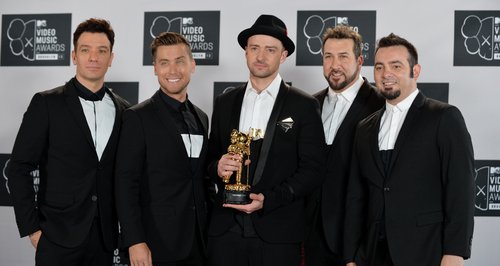 The 'Bye Bye Bye' stars were reportedly all in attendance for the ceremony between Chris and Karly Skladany.

Justin Timberlake reprteodly once again met up with his 'N Sync bandmates at the wedding of Chris Kirkpatrick this weekend.

The 'SexyBack' singer and wife Jessica Biel joined the likes of Joey Fatone, Lance Bass and JC Chasez for the ceremony in Florida, reports People magazine.

Chris tied the knot with fiancé Karly Skladany at the Loews resort hotel in Orlando – with all five members of the boyband in attendance.

It comes after the group reunited on stage for the first time in a decade to perform during a special segment of the MTV Video Music Awards 2013.

Meanwhile, Justin will be hoping to win big at the MTV EMAs 2013 this weekend where he is among the top nominated artists.

The event takes place live from the Ziggo Dome in Amsterdam on 10th November.