The 'Boyfriend' singer can be seen alongside manager Scooter Braun in the unveiled image from the cartoon.

Justin Bieber can be seen in full cartoon mode for his upcoming The Simpsons cameo in the first released image from the episode.

The 'As Long As You Love Me' singer posted the shot to his official Twitter page earlier today (9th May) and is alongside manager Scooter Braun in the picture.

Executive producer of the series Al Jean kept quiet on the exact storyline when teasing the episode to Entertainment Weekly.

"He tries to get into a talent show that Bart is playing piano in and they won't admit him," he said. "Draw your own conclusions."

A broadcast date is yet to be decided – with the cameo being filmed last year.

Check out Justin Bieber in The Simpsons below: (Picture: Twitter) 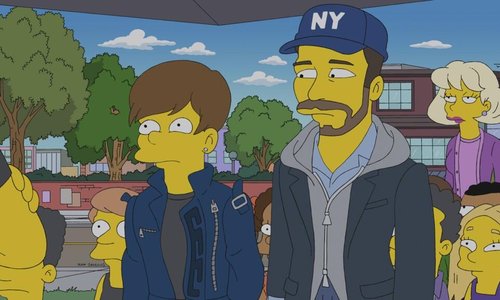 Meanwhile, the singer is currently on the road on his 'Believe' world tour and faced criticism during his stay in Dubai after reportedly setting off six speed cameras.

His show in Dubai also saw a fan storm the stage and get tackled by security who then knocked over his piano.