The ‘What Do You Mean’ star has announced that he has had to pull out of his performance at the UK festival.

Bad news for fans of the Biebs - Justin Bieber has had to pull out of his headline performance at Fusion Festival due to unforeseen issues.

Justin Bieber's New Album Is EDM-Inspired - But Will Mariah Carey And French Montana Be On The Record?

Justin was due to headline Friday 28th August at the festival in Cofton Park, Birmingham, joining the likes of McBusted and Rudimental - the Saturday and Sunday headline acts - on the day his brand new single, 'What Do You Mean' will finally drop.

Justin tweeted the news that he would no longer be able to perform and apologised to his UK fans:

UK beliebers I'm going to make this up to you soon. pic.twitter.com/YHp7NYGdsv

I do want to thank the prince's trust for their understanding and I don't take moving any show lightly. I will see u soon UK

The organisers of Fusion Festival also released a statement saying, "Fusion Festival are incredibly disappointed to hear of Justin Bieber's withdrawal from the event. We are working hard to secure another exciting act for the festival and will hopefully have some news shortly.

"We will also announce details of how you can apply for a refund should you require one, please stay tuned to our social media channels for further announcements soon."

The event will be taking place from 28th – 30st August this summer in Cofton Park in Birmingham, and the UK Beliebers were looking forward to his first show performing his brand new single.

"I love the UK and I'm excited to be playing Fusion this year," Justin said in a statement to announce his headline post back in March. "There are some great artists on the line-up so to be headlining the Friday night is a real honour.

"Missed the stage. Time to get back to work," the 'Boyfriend' star also tweeted to celebrate the announcement.

honored to be headlining Fusion Festival Birmingham UK on Aug 28th. tickets on sale friday at 9am UK time. It's time http://t.co/rj7U1zltxH

Missed the stage. Time to get back to work 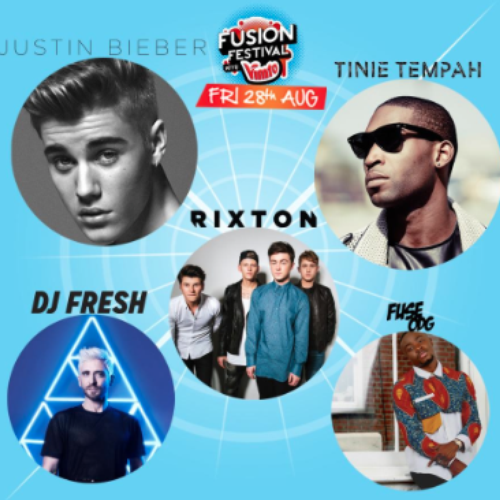 The full line-up is: