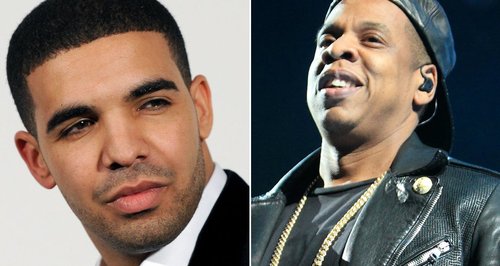 The 'In Da Club' rapper has given his verdict on the apparent rivalry between the two rap stars.

50 Cent has predicted that the slow-building feud between Jay-Z and Drkae is "just getting started" while predicting a "separation" could be the result of the growing rivalry.

Jay-Z caused controversy with his comments about Drake in a new freestyle with Jay Electronica called 'We Made It', where he addressed Drake's supposed critique of his art collection.

> The 11 greatest hip-hop feuds of all time!

"I think it's just getting started, but you know what? It's interesting," 50 Cent revealed to US radio host Russ Parr. "I think you're supposed to rap about things that are in your actual life.

"I think I would respond to it, I don't know, it depends," 50 Cent added, when asked if Drake should respond to Jay-Z's rap. "It might actually create a separation here, people.

"Where there's the team RiRi and Drake on one side and Jay-Z and B [Beyonce] on the other side."

"Sorry Mr. Drizzy for so much art talk, silly me, rapping 'bout s&&t that I really bought," Jay-Z rapped in the 'We Made It' freestyle. "While these rappers rap about guns that they ain't shot, and a bunch of other silly s**t that they ain't got."

Drake and Rihanna are rumoured to have renewed a romantic relationship in recent months.