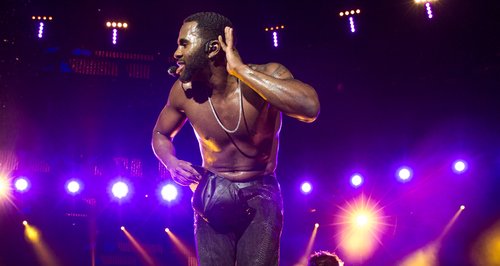 The 'Talk Dirty' star brought sex appeal and talent to the stage for his Jingle Bell Ball set, as well as ripping off his shirt.

Jason Derulo made a big impression with his amazing songs, sexy dance moves and impressive physique for his set at the Capital FM Jingle Bell Ball 2013, which saw hip ripping off his vest to screams from the audience.

The US star kicked off his performance with 'The Other Side', taken from his 2013 album 'Tattoos', emerging onto the O2 Arena stage in a leather cap and jacket with a black vest and shiny leather trousers.

The crowd was then treated to medley performance of 'In My Head' and 'Ridin' Solo' which saw both Jason and his backing dancers showing off some incredible moves as part of a breakdown.

It was then time for the 'Trumpets' for Jason's next song before he took things old-school with his hit 'Whatcha Say' to the delight of his fans in the crowd.

For his final song of the night Jason bought the sexiness factor up to full with a performance of his recent chart hit 'Talk Dirty', teasing the crowd with some raunchy dance moves before ripping off his black vest to show off his toned body and muscles.