We’re loving Example’s new tracks, so when we got the chance to chat to the man himself, we asked him all of the important questions – including whether he likes spinach and beetroot smoothies and whose head he would most like to get into.

Any die-hard Example fans will know that ‘Live Life Living’ – his whopping FIFTH studio album – doesn’t feature as much rap as it’s predecessors. He told us, “ I wanted to try and do a whole album where there was no rapping, just to see if I could do it and to challenge myself because it’s out of my comfort zone, really, to just sing a whole album.“

“And then apart from people on Twitter saying ‘Oh no we miss the raps!’ I think the main thing was that I missed it myself, because it’s just a nice, exciting injection of energy into any song. So it was an easy decision to go back and add it into five or six tracks. But now I’m thinking ahead to the next singles and the next album, I’m probably going to try and add a lot more rap in. I think it’s always whatever the song needs, really.” 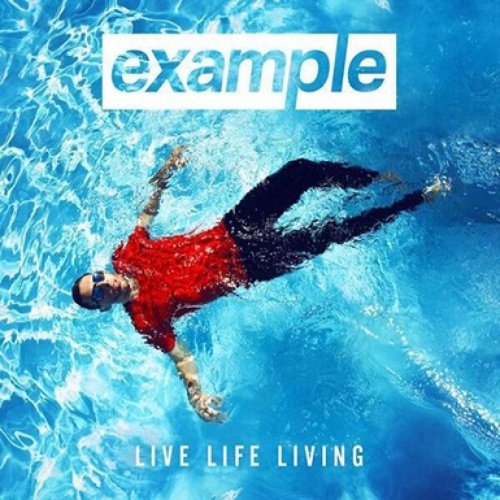 Example recorded some of his album in Beverly Hills (nope, we’re not jealous or anything…), but daily life in the States isn’t what he is used to. He told us, “The thing with LA is that everyone is really super health conscious, even more so than anywhere in London. We were getting up, going for a run in the hills, coming back and having these superfood smoothies and then going in the studio which is not usually how I start the day in London.”

But the thing with superfood smoothies is that most of them taste, well, a bit gross. Example seems to have got on board with some of the weirder flavours though, he told us, “I love the beetroot and the spinach! I love the earthiness of those smoothies.” Yup, nothing better than a drink tasting ‘earthy’…

In between earthy smoothies, Example played around with a few alternative names for his album, including ‘Only Human’, which has now been nabbed by a certain Cheryl Cole.

He said, “Mine would have been announced about three months ago so she probably would have changed hers, having heard that mine was called the same. But I think last year we had about three or four albums called ‘Red’, didn’t we? Which is really original of all those guys! I’m just happy that we didn’t go with 'Only Human' because I think ‘Live Life Living’ better describes this album anyway.”

One of the tracks on the new album is called ‘At Night’, which Example has said is about getting into someone else’s head. But whose head would he choose? “If I could get into anyone’s head I’d maybe like to get into the prime minister’s. See what is going on up there, you know what I mean? Try and sway his thinking somehow.”

And what would be Prime Minister Example’s first order of business? “I’d get the pavement fixed outside my house. Yeah I’m hoping that that happens.”

'Live Life Living' is available to pre-order now, it will be released on 7th July.