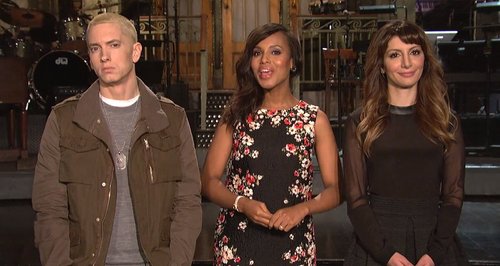 The 'Rap God' singer gives a blank stare to camera as he prepares for his live performance.

Eminem can be seen declaring his love for cupcakes as he stars in a Saturday Night Live promo alongside host Kerry Washington.

The 'Berzerk' man initially gives a blank stare to camera as Kerry tries to get him involved in the promo.

The episode will air tomorrow evening (2nd November) in the US as Eminem performs as the musical guest on the show.

This week saw the rapper head straight to the top of the iTunes chart with his new single 'The Monster' – which features Rihanna.