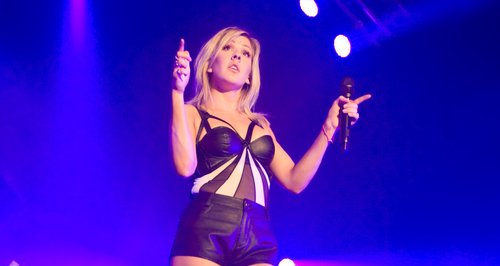 The artists believe the 'Burn' singer will win big at this year's industry event.

The Vamps and Sam Smith have been speaking to Capital about who they think will win big at the BRIT Awards 2014 and both highlighted Ellie Goulding as a worthy winner.

The female star is up for a total of five awards including Best British Single and British Female.

The Vamps Predict Success For Ellie Goulding At BRITs 2014

"I think Ellie has been exceptional, well for a couple of years, but especially this past year," declared James to Capital's showbiz reporter Kevin Hughes. "I think it's just highlighted how awesome our music industry is so we're proud."

New Vodafone Big Top 40 number one Sam said how much he was in love with Ellie's song-writing talents.

"I think she is incredible and I love her song-writing," he said. "I just think her self oozes through her music.

"The minute I heard 'The Writer', I was sold. It's just an incredible song. I love 'Burn' and the whole album is great. 'Goodness Gracious' is one of my favourites at the moment and I'm a massive fan. I really hope she wins it."

> Check Out The Full Nominations Of The BRIT Awards 2014

This year's show will also see Ellie performing on the night on a line-up which includes Katy Perry and Bruno Mars.

Capital will be backstage from this year's show giving you all the gossip and news as soon as it happens.