WATCH: Ed Sheeran's BEAUTIFUL Cover Of 'Stand By Me' In Tribute To Ben E King 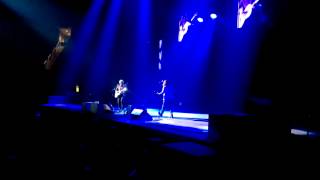 The UK star got EVERYONE singing along with him for his cover of the classic anthem.

Ed Sheeran paid tribute to late musical idol Ben E King while touring America this week with an incredible cover of the singer's signature track 'Stand By Me'.

The 'Thinking Out Loud' star brought out opening act Ben Kweller to join him in a duet of the song during their show in Salt Lake City this week, making sure the WHOLE crowd was singing along to every word.

Ed's currently taking his 'X' album out on the road across North American in his first headlining tour of the continent, and it looks like he's going down a treat.

Ben E King died on 30th April three weeks ago at the age of 76 after a lengthy career in the music world.