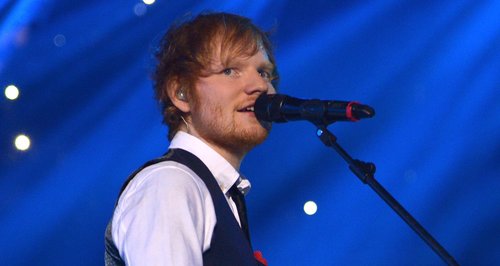 The 'Thinking Out Loud' star has recorded the track for popular US TV series Sons Of Anarchy.

Ed Sheeran is the gift that just keeps on giving in 2014… the red-haired superstar has just dropped another new song on us!

'Don't' singer Ed has recorded a hauntingly beautiful cover of Foy Vance's 'Make It Rain', a special version made for the hit US TV series Sons Of Anarchy.

The song was featured in the penultimate episode of the long-running series this week, and Ed has now made his 'Make It Rain' cover available to download as well.

"I released a brand new song today on iTunes. I did a cover of @foyvance for the penultimate sons of anarchy episode, I'm really proud of it," he tweeted to reveal the news.

The acoustic ballad sees Ed at his most raw and emotional, and was played several times by the UK star during his tour dates over the summer.

I released a brand new song today on iTunes. I did a cover of @foyvance for the penultimate sons of anarchy episode, I'm really proud of it

Ed Sheeran is set to perform live at the Capital Jingle Bell Ball 2014 with Morrisons this coming Sunday 7th December.

The show is now completely SOLD OUT… so your only way in is to WIN! Click here for more details!