The '22' singer gives the 'Lego House' singer the homemade treat with a special handwritten message.

Taylor Swift poked fun at the MTV Video Music Awards incident with Kanye West back in 2009 in a handwritten note to Ed Sheeran.

The note was attached to some special homemade jam, supplied from the country star to her British friend.

The pair are currently on the road together for Taylor's 'Red' world tour.

The 'Small Bump' star posted a picture of his gift on his Twitter page and was amazed at the treat.

Check out a picture of the jam sent to Ed Sheeran by Taylor Swift below: (Picture: Instagram) 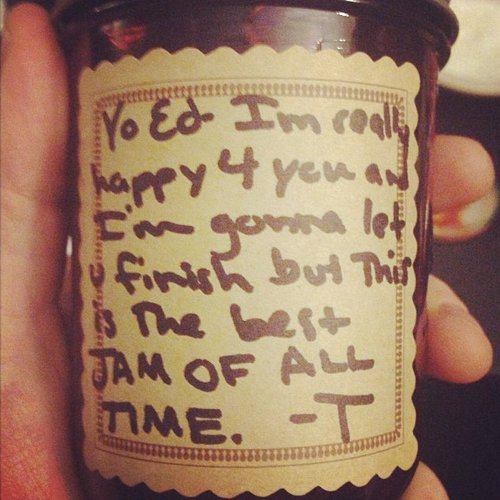 Taylor will be back at the ceremony this weekend, with Kanye also set to perform on the night.

Meanwhile, Ed has announced details of his biggest US tour date so far, revealing he will headline New York's Madison Square Garden on 1st November.