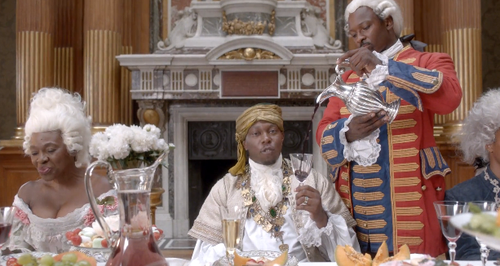 The UK rapper is back with the second music video from his upcoming fifth studio album.

Dizzee Rascal has unveiled the official video for a brand new song called 'I Don't Need A Reason'.

The single is expected to be the second release from Dizzee's upcoming new album 'The Fifth', following his huge Vodafone Big Top 40 success with Robbie Williams team-up 'Goin' Crazy'.

The video sees Dizzee transported to a period English setting as a kingly gentleman of leisure, playing chess and holding banquets, while being attended to as he sits on a throne.

The UK rapper previously revealed the likes of Jessie J and will.i.am will also feature on his album, the follow-up to 2009's 'Tongue N' Cheek'.

Dizzee Rascal is set to officially release his brand new album 'The Fifth' on 30th September.

Check out the official music video for Dizzee Rascal's new song 'I Don't Need A Reason' below: