Are Disclosure And Madonna Working Together On A New Song? 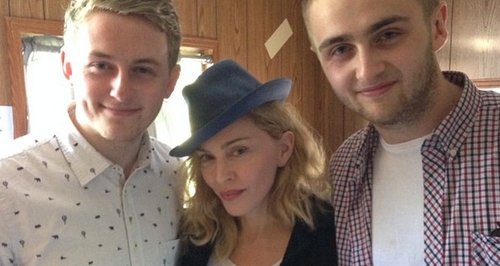 Fans tweet their speculation after seeing a picture of the boys hanging out with Madonna.

Disclosure and Madonna have sparked rumours a team-up between them is on the way after posting a snap together over the weekend.

The Queen Of Pop, 'Turn Up The Radio' singer Madonna, uploaded an Instagram picture of herself posing with Disclosure brothers Guy and Howard Lawrence n Friday evening (6th June).

"Getting lit! Full Disclosure… #dancing #fun #life #livingforlove," Madonna posted alongside the picture of her smiling with the "White Noise' duo.

Fans are now convinced the picture hints at the duo working with Madonna on her upcoming new album, after she previously confirmed that Avicii is also involved in the project.

Madonna was at with Disclosure at their show last night. THIS COULD MEAN AMAZING THINGS.

@Madonna is working with @Disclosure, could it be for their album? Or M's album??? Time will tell