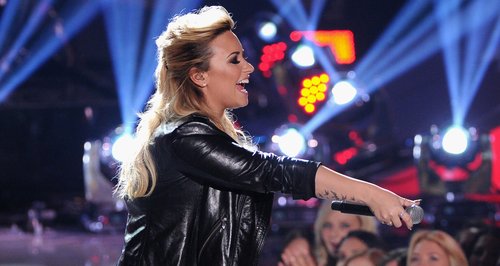 The 'Heart Attack' singer was one of the star performers at the annual awards show in Los Angeles.

Demi Lovato tasked her close friend Nick Jonas to help out with her performance at the Teen Choice Awards 2013 over the weekend.

The 'Heart Attack' star was joined on stage by Jonas Brothers singer Nick, who took on the role of drummer for Demi's performance of new single 'Made In The USA'.

Demi headed out on stage in Los Angeles at the Gibson Amphitheatre with a rocker look of leather jacket and trousers, a band t-shirt and high heels, paired with smoky eye make-up and a rock star hairstyle, while Nick kept things simple with a black and white US flag t-shirt.

The evening was a huge success for Demi following the success of her 2013 self-titled album, with the US star picking up both Choice Female Artists and Choice Female Single for 'Heart Attack'.

Among the other winners at this year's Teen Choice Awards 2013 were One Direction, Taylor Swift and Ed Sheeran.

Watch Demi Lovato performing new single 'Made In The USA' below: