David Guetta At The iTunes Festival 2014: The Best Moments 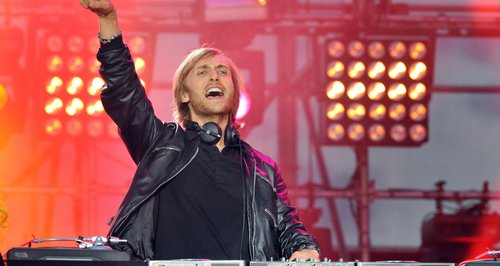 David Guetta performed a killer set last night (3rd September) at the iconic Roundhouse concert venue in London. Capital was at the French DJ's show and can confirm that he absolutely nailed it! Don't worry if you weren't there, here are some of the BEST moments from his epic set!

Even before the superstar DJ took to the decks, the Roundhouse was wowed by two incredible artists! The night opened with a DJ set from newcomer Robin Schulz, whose remix of Lillywood's 'Prayer In C' went straight to number 1 on the Big Top 40, and was followed by an equally impressive performance from 'Rather Be' chart-toppers Clean Bandit!

There were hundreds lights and friggen' lasers!!

You can't have incredible dance music without a bit of visual stimulation - its the law! Okay, not really, but they look SO COOL! From LED lights running from floor to ceiling and a mesmerising laser show, this was definitely a treat for the eyes as well as the ears. Plus, don't forget that song he did with Jessie J WAS called 'Laserlight'! ;)

You can't have lights without a bit of FIRE!

Things must have been nice and toasty on the front row - Guetta brought some serious pyro with him! From shots of fire to jets of steam and fireworks, the Frenchman definitely knew how to wow a crowd!

You can't forget about the killer tunes! Guetta was dropping some serious jams!

Not only did he bust out his classics from 'Love Is Gone' right through to his latest Big Top 40 smash 'Lovers On The Sun', he was even cheeky enough to drop in other tunes from the likes of Yeah Yeah Yeahs, John Legend and even a cover of Oasis!

And the result? Thousands of euphoric party animals!

Shapes were thrown, beats were dropped and fun was definitely had at the Roundhouse! The crowds took to social media to share their experiences and the decision was unanimous - David Guetta rocked it!

Ok, David Guetta was really awesome. I expected him to be good but he was bringing down the Roundhouse! Thank you #itunesfestival

Keep It Capital for the latest from the iTunes Festival!

All the hottest Capital artists performing at the iTunes Festival will be chatting to Max backstage. Catch her Monday-Thursday from 10pm and Sundays from 7pm.

More From The iTunes Festival 2014