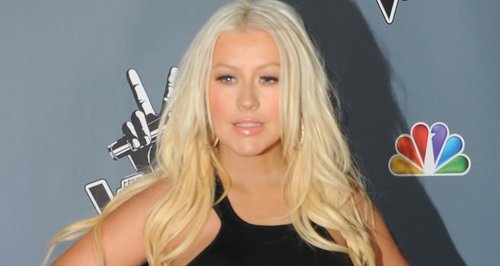 The Voice US judge says the two have talked about recording a duet in the future hopefully.

Christina Aguilera has revealed she would love to collaborate with "super talented" Ed Sheeran while the pair discussed his recent guest appearance on The Voice US.

The 'Lego House' star has joined Christina as a guest mentor on the new season of the NBC show to help out in the battle rounds, and 'Beautiful' singer Christina says she definitely sees the pair teaming up for a duet at some point.

"I see a collaboration in the works hopefully," Christina revealed on Extra! after filming. "I would love to collaborate with this guy, he's super talented.

"I've made some neo-soul songs if you want to get back into that," Ed then told her, to which she replied: "He did say 'Back To Basics' and 'Stripped' were the stuff!"

Ed also named Christina's songs 'The Voice Within' and 'Ain't No Other Man' as his favourite Christina songs, causing the US star to admit she was 'dorking out" about his praise.

"Everyone is dying when they first see this guy too!" Christina revealed, of Ed's guest appearance on The Voice US. "I'm like,' OK I'm secondary right now!"

Earlier this week it was announced that Ed Sheeran will headline his own show at Madison Square Garden in New York on 1st November.

The Voice US returns to screens on 23rd September with a reunited panel of Christina Aguilera, Adam Levine, Cee Lo Green and Blake Shelton.