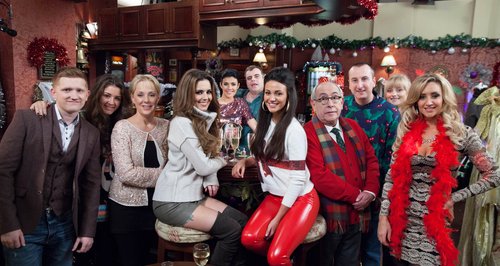 The 'Under The Sun' star features opposite Michelle Keegan in the special charity episode.

Cheryl Cole has been pictured on the set of UK soap Coronation Street this week while filming for a special charity episode of the show.

The 'Call My Name' star is seen pulling pints alongside Corrie actress Michelle Keegan as well as posing with the rest of the soap's cast for the one-off episode, which aims to raise money for ITV's Text Santa fundraiser.

Check out a picture of Cheryl on set below (Credit: ITV):

Cheryl's role in the special sketch will see her arriving in Weatherfield to find her childhood friend Tina McIntyre, played on the soap by Michelle, as well as featuring other characters from the popular weekday soap.

View a snap of Cheryl with Corrie star Michelle Keegan below (Credit: ITV):

Cheryl Cole has been working on music for her next studio album over the past several months.