The 'Love On Top' star can be seen getting ready to hit the road for her upcoming jaunt next month.

Beyonce has released a picture from rehearsals for her upcoming 'Mrs. Carter Show' world tour.

The 'Crazy In Love' star posted the shot to her official Tumblr page during the same week she unveiled a new poster for the outing.

The Destiny's Child star can be seen on her knees with a group of backing singers as they run through one of the tracks.

Tickets for the outing sold out in minutes when they went on sale last month, with over three million fans applying to get the chance to see her live.

The singer will bring the jaunt over to the UK next month – performing six nights at London's O2 Arena. 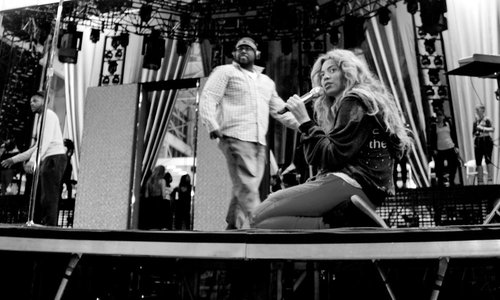 Meanwhile, the singer will also be over in the UK this summer after being confirnemd as one of the headline acts for V Festival 2013.

A tracklisting for her new album has also been rumoured to have been leaked online this week.