The 'Love On Top' singer's synchronized dance routine with her younger sister made an amazing moment.

Beyonce made a jaw-dropping surprise appearance at Coachella Festival 2014 over the weekend when she popped up during sister Solange Knowles' set.

The 'XO' star made the crowd go crazy when she appeared on stage on Saturday evening (12th April) at the Empire Polo Club during the final moments of her younger sister's performance.

Beyonce and Solange then proceeded to treat fans to a synchronised dance routine to huge cheers from the audience, as Solange performed one of her most popular tracks 'Losing You'.

Check out a picture of Beyonce dancing alongside sister Solange Knowles at Coachella 2014 below (Credit: Getty): 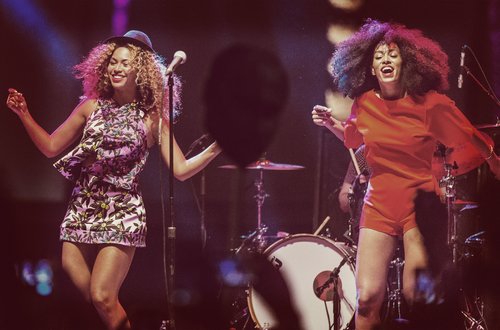 The US star's husband Jay-Z also made a surprise Coachella appearance this year when he and Nas put their decade-long feud behind them for a performance of 'Dead Presidents II'.

> Beyonce's 'XO' And 'Blow' Given AMAZING Remixes By Monsieur Adi.