Someone captured the red carpet moment Beyoncé told 21-year-old Raye that the track she wrote will open The Lion King: The Gift album.

The incredible moment Beyoncé revealed the news to Raye that the track she wrote, 'Bigger' would be the first on her album, 'The Lion King: The Gift', has been captured and it honestly might make you cry.

The Lion King premier took place in London on Sunday and the queen herself, Beyoncé, walked the red carpet along with some of the songwriters for the album that is accompanying the film she's executive produced- including 21-year-old singer and songwriter from Tooting who couldn't look happier to find out the news.

Raye took to Twitter to spread the news, writing: "Beyoncé told me I’ve written Track 1 on the new album it’s called Bigger . I can’t I can’t" along with plenty of crying emojis, 'cos Beyoncé."

Beyoncé, who is playing Nala in the live action remake of the iconic Disney film, has created the album featuring a multitide of African pop and rap stars and enormous names including Pharell Williams, Kendrick Lamar and even daughter Blue Ivy, but it is a separate album to The Lion King soundtrack.

About the project Beyoncé's said: "Each song was written to reflect the film’s storytelling that gives the listener a chance to imagine their own imagery, while listening to a new contemporary interpretation."

Took my dad and Net to the lion king premier. 🦁👑 I can’t begin to tell you how incredible this day was ... 😰 . Head to toe @viviennewestwood . 📸 - @aliyahotchere

Now, we're going to go out on a limb here and say that Raye may have just had the best Sunday of her life, walking the carpet with her BFF Beyoncé, but since she's clearly been working on music with her for some time now, we're thinking she may just be slaying in general ATM?!

> Download Our Brand New App For All The Latest Beyoncé News 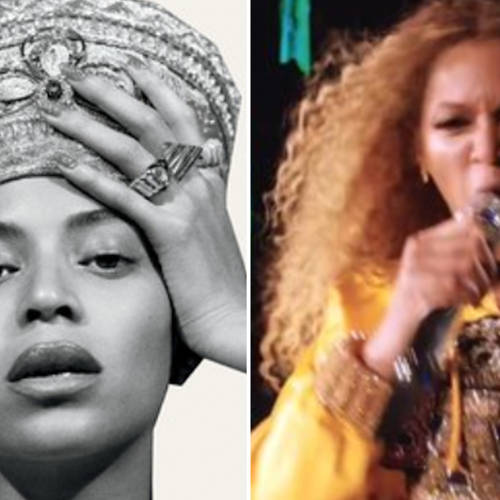