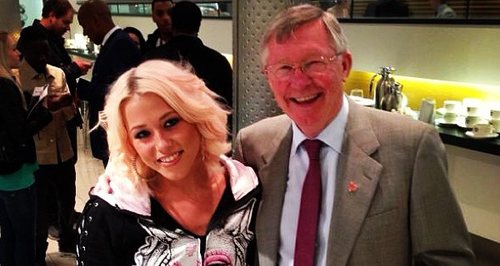 The 'Party Over' singer sang at the famous football stadium yesterday for a charity match.

Amelia Lily performed live in front of thousands of football fans over the weekend during a Manchester United football match, and also got to meet the team's legendary manager Sir Alex Ferguson after the event.

The 'You Bring Me Joy' singer joined the likes of JLS and Tinchy Stryder to perform at the legends charity match between United and Real Madrid, and tweeted fans after to say how much she had enjoyed meeting the soon-to-be-retired Alex Ferguson.

Check out a picture of Amelia Lily performing live at Old Trafford over the weekend below (Credit: Getty):

The singer was spotted walking around the stadium earlier in the day in a pair of multicoloured leggings and a black hoodie but changed into a monochrome dress and leather jacket for her stadium performance.

Amelia Lily is set to release her debut album 'Be A Fighter' on 29th July.