The 'Rolling In The Deep' star has to fight back the tears on stage as she collects the award and thanks her boyfriend.

Adele was overcome with emotion as she won the Academy Award for Best Original Song with her James Bond theme 'Skyfal'.

The 'Someone Like You' star becomes the first artist to ever recivev the honour for a theme to the 007 franchise and was presented with the prize from Richard Gere, Queen Latifah, Renne Zellweger and Catherine Zeta Jone.

"Thank you so much, this is amazing," she said as she took to the stage with producer and co-writer Paul Epworth.

As she turned to Paul to offer her thanks for always believing in her, she paused as she fought back the tears.

"I've got to thank Adele for being the best person I've ever worked with," said Paul as he took the time to offer some extra thanks. 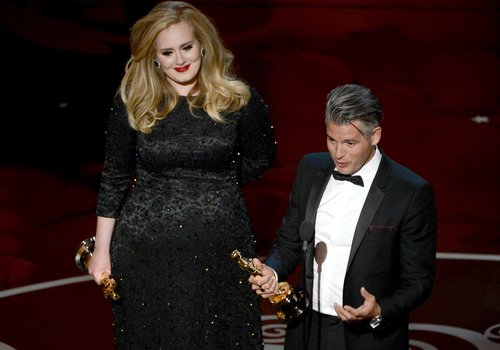 As well as accepting the award for the song, the Tottenham-born singer also performed the track live – her first performance since giving birth.

Watch Adele picking up the award for Best Original Song at the Oscars 2013 below:

The big winners on the night were Ben Affleck's Argo – which scooped Best Picture.

British actor Daniel-Day Lewis also became the first star to win the Best Actor prize three times as he was honored for Lincoln.

Silver Linings Playbook, Django Unchained and Life of PI were also the recipients of some of the top awards.

The ceremony was hosted by Ted and Family Guy star Seth MacFarlane.